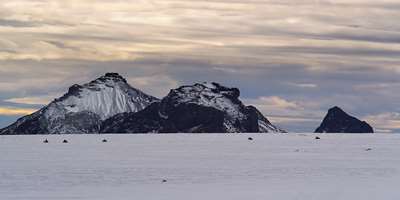 Knowledge is the key to progress

Landsvirkjun is intent on becoming a leader in the sustainable use of renewable energy sources and resolute in pursuing and supporting innovation and technological development within the field. In order to achieve this, extensive research is conducted in a diverse variety of disciplines, including research on ecosystems, meteorology, hydrology, glaciers and geology, to name but a few. The impact of power projects on ecosystems, water systems and various other factors are monitored, as well as the effectiveness of mitigation measures. A number of different parties, universities, research institutes, companies, individuals and scientists, both national and international, conduct this research.

Landsvirkjun has been involved in assessing the feasibility of a sub-sea cable connection with the European electricity grid for some time. Preliminary assessments, carried out up until the turn of the last century, suggested that a sub-sea cable was technically possible but not economically feasible. However, changing conditions in the European energy market indicate that a sub-sea connection with Europe could in fact prove to be a lucrative project.

Connecting the Icelandic electricity grid to the European grid would have a substantial effect on Icelandic society and the Icelandic economy. It would therefore be crucial to assess both the negative and positive impact of such a project before moving forward. The prerequisites for a project of this scale would be the achievement of a broad consensus within society and effective cooperation with stakeholders.

In light of this, the Icelandic Ministry of Industries and Innovation appointed a 15 member, cross- party committee to assess the macroeconomic and social implications of a sub-sea cable and they returned their verdict to the Minister in June, 2013. The report was put forward for debate within the Icelandic parliament and then referred to the Industrial Affairs Committee of the Icelandic parliament. The committee returned its findings in February, 2014, recommending the further development of the project. They also stated the importance of raising public awareness and a broad perspective on the potential impact of the project.

Competitiveness of the project

The changing landscape of the energy market and technological advancement are perhaps the strongest indicators that power exchange via a sub-sea cable could prove to be competitive within the international market. Sub-sea cable projects are becoming increasingly large-scale as new technology allows for longer and more powerful connectors, at greater depths, across difficult sea terrain.

The increasing demand for ‘fossil fuel based energy’ has resulted in historically high energy prices worldwide. Electricity prices are no exception as over half of the world’s electricity is produced by utilising coal and natural gas. There is also increased awareness on the negative environmental impact of burning fossil fuels.

The International Energy Agency predicts that the demand for energy in 2035 will be 73% higher than what it was at the beginning of the century.

In light of this, Europe has developed a support mechanism to ensure the long-term profitability of renewable electricity generation and the reduction of GHG emissions. It is entirely possible that Icelandic electricity, generated via sub-sea cable, would be eligible for such support.

The latest assessments indicate that electricity sales via a sub-sea cable could prove to be profitable for Icelandic energy producers and competitive in price for electricity purchasers in the rest of Europe. However, the profitability of such a project would be dependent on bilateral agreements, addressing not only energy prices but the responsibility taken on by both parties with regard to the potential risk factors involved. Landsvirkjun has been purposefully involved in an informed discussion of the underlying risk factors involved, and this work will continue.

The large scale of the project would demand the broad consensus of Icelandic society for it to proceed. Further research would be required on the macroeconomic, societal and environmental impact of the project and an open and informed discussion, within Iceland, on the relevant factors would be necessary. Work has been ongoing on these issues, including the assessment carried out by the cross-party advisory committee appointed by the Icelandic Ministry of Industries and Innovation and an analysis conducted by Gamma (GAM Management) on the potential effects of the cable on Icelandic households.

Where would the energy come from?

A sub-sea cable supplied by hydropower in Iceland would offer the possibility of exporting and importing energy. Renewable energy within Europe is mostly reliant on intermittent energy sources such as wind and solar power. However, the demand for energy fluctuates on an hourly and seasonal basis and Europe needs to guarantee more reliable sources of electricity supply, in order to compensate for the unavoidable intermittency of solar and wind power.

A sub-sea cable would give Icelanders the opportunity to better utilise the country’s energy resources and would increase the revenue created by these resources for the national economy.

The Icelandic grid can offer this reliability and a sub-sea cable would mean that Iceland could dispatch electricity, via the cable, according to need. The sub-sea cable would enable Iceland to better utilise the value of dispatchable, renewable energy.

The export of electricity would allow for the more efficient utilisation of resources in Iceland and generating more electricity, via currently operational hydropower stations. The inflow rate to the hydropower reservoirs in Iceland is variable between years but is, on average, higher than the amount required to fulfil current energy contracts. In isolated electricity systems, excess water flows in spillways could be used, in part, if the system were connected with larger markets.  Moreover, Icelandic consumers do not always fully utilise available energy resources and energy is therefore often wasted within the closed national grid. Connecting to a larger grid would mean more effective utilisation. In dry years or in the case of unforeseen circumstances, Iceland could reduce the energy export level and even import energy temporarily.

The exported electricity would be partly supplied by new power projects from already utilised areas and new areas. The prospect of new projects in hydropower, geothermal and wind energy would be reliant on the framework set out by the government on energy utilisation, including the Master Plan for Hydro and Geothermal Energy Resources in Iceland.

Preliminary assessments on investment costs and the length of the construction period show that the shortest distance possible would be the most economical option, under present conditions. The shortest distance for a sub-sea cable between Iceland and the UK would be approx. 1000km and appropriate locations at either end are presently being assessed, as well as different cable routes.

Potential connection areas in Iceland, for the sub-sea cable, are being considered as well as a number of other factors, including sea depth, sea terrain, wave height, fisheries and sailing routes. The project would also require necessary reinforcements of the electricity grid. The UK has focused on the issue of accessing the UK national grid. The next step involves further research on the feasibility of different landing locations, the impact on other industries such as fisheries and oil production, and of course the impact on the environment.

Statnett and National Grid, the owners and operators of the national grids in Norway and the UK, are developing a 1, 400 MW, 700 km sub-sea cable connecting the two countries.

Wind power in the future

To the north of Búrfell, is a lava field by the name of Hafið. Landsvirkjun has erected two 900 kW wind turbines in the area, for research purposes. The wind turbines have been successfully operated since the end of January, 2013 and there are clear indications that Iceland is an advantageous location for electricity generation, utilising wind power.

The wind turbines at Hafið have so far generated 5,900 MWh in the eleven months they have been in operation which is higher than the annual 5,400MWh initially predicted.

The third pillar in the power system

Landsvirkjun has made the decision to conduct further research on the wind power capacity at Hafið, via extensive wind velocity and scenario studies. Proposals for the size and location of potential wind farm sites will also be analysed. The project is innovative as the potential of wind power has not been researched in Iceland before. Research areas will include the impact of the project on the environment, on society, the feasibility of development and operations and opportunities in utilising the interaction of wind power and hydropower. The legal framework and regulations will need to be reviewed as well as an analysis of the advantages of utilising wind farms for the electrical grid. An agreement has been reached with the engineering companies Efla and Mannvit who will provide consultation on the project. The project will be ongoing for the next two years.

The objective of the project is to ensure that Landsvirkjun has enough supportive evidence in the form of advanced analyses and data, to make an informed decision with regard to potential wind farms.  Further research and preparation supports effective procedures in the development of wind power as the third pillar in the electrical system.

In Iceland, wind velocity is generally at its highest during the winter period when there is minimum water flow to Landsvirkjun’s storage reservoirs.  In addition, hydropower backed by storage is ideal for load balancing. Consequently, the possible synergy of wind- and hydropower electricity generation is high.

Environmental research is a crucial part of Landsvirkjun’s operations. Research provides insight into the decades ahead and monitors a variety of environmental and societal factors affected by the Company’s operations. Research provides baseline information as well as supplying crucial information on future scenarios which could prove important in the development and design of specific power projects.

Extensive information on the natural environment and society are important in the development of potential power projects. Research is essential in acquiring new knowledge in the many areas possibly affected by the Company’s operations. Research is conducted on ecosystems, geology, archaeology, geography, tourism and many other areas.

Once the decision has been made to utilise a resource, research monitoring begins. Initially the focus is on mitigation measures, executed for the purpose of minimising the environmental impact of development. Once the construction period reaches completion and operations begin, then research monitoring focuses on the impact of particular environmental aspects and the success rate of mitigation measures.

Research and monitoring projects in 2013:

Landsvirkjun aims to be a carbon neutral company and works systematically to reduce carbon emissions and other greenhouse gas emissions in its operations.

Carbon dioxide emissions from geothermal boreholes in Krafla, Bjarnarflag and Þeistareykir have been monitored for years. However, information on the natural emissions from geothermal fields is limited and a decision was made this year to increase research and therefore knowledge in this area. Carbon levels in the soil and vegetation at the Búðarháls Hydropower Station were measured, as a direct result of an assessment on GHG emissions in the Sporðalda Reservoir site area. Efforts to neutralise carbon emissions included an agreement with the Iceland Forest Service and the Icelandic Soil Conservation Service on carbon capturing in two new areas. An agreement was also reached with Kolvið on the neutralisation of all carbon emissions as a result of Landsvirkjun’s use of petroleum and diesel for transportation purposes, the air travel of employees, and the disposal of waste.

Landsvirkjun is committed to successful cooperation with society by supporting transparent working methods and knowledge dissemination. Extensive information on environmental research can be found in Landsvirkjun’s Environmental Report. Research reports can presently be accessed at Landsvirkjun’s library but the objective is to make all these available via the web at Gegnir.is. The success of research carried out in the affected areas of the Fljótsdalur and Kárahnjúkar Stations can be accessed on the sustainability web run by Landsvirkjun and Alcoa www.sjalfbaerni.is.

Summaries and real time information on the monitoring of various environmental aspects can be accessed annually at Landsvirkjun’s website.